ACRES DESTINY has become a household name in the performance horse world, producing champion after champion in a range of disciplines including cutting, campdrafting, challenges & reining.

MARNIE JAMES was one of the most consistent performers of her time and is now regarded as one of the best producing mares in the country.
1975 - 2004

A Dam Destined for Greatness

Rick intensely believes when selecting any horse that strong mare lines are critical to ensuring a quality product. Marnies Destiny’s achievements are owed to his outstanding dam line. Marnie James was one of the most consistent performers of her time and is now regarded as one of the best producing mares in the country. She produced two Cloncurry Stockman’s Challenge Winners and one finalist. Marnie James sadly died in 2004, however her bloodlines are very strong and will continue forever.

Marnie James is by Jessie James and is out of Ramblers Marnie. Marnie is from a line of successful stockhorses that is traceable back to 1924. Marnie James has an incredible performance history and she has won many titles in led events, cutting and campdrafting. She was bred by Len Whitley in consultation with Chiller Seeney.

As a yearling and two year old she won many led events (Len can’t remember how many). As a three year old she went cutting. Cutting wasn’t big in the area then (and Len was learning), however she won or placed in almost everything she competed in. She won two novices, many maidens, and several non pro events. She then went campdrafting as a 5 year old. At her first outing at Mt Perry draft she won the maiden, then the novice and second in the open. Won a three round open draft at Monto, then won Eidsvold open and then she was bred.

Due to hard times and drought she was not heavily drafted. Lenny also started to breed from her every second year. She managed to get to 25 drafts for 17 wins or places. Some of her other results include the following:

The ASHS approached Lenny about inducting Marnie James into the Hall of Fame, however they never followed it up.

When selecting a stallion to breed to, it is critical to have such a well performed and consistent dam line.
Acres Destiny has produced some great horses, however when you breed to Marnies Destiny it is the
brilliance & consistent performance of Marnie James that ensures you are getting the very best that there is.

Marnie James had eight foals and from these only five were campaigned. These five horses have an amazing history of performance and include horses such as Tecoma Jessies Cadet, Southern Oak, Marnies Command, Marnies Peppy and Marnies Destiny. These horses have won too many drafts and other events to list, however some of the major achievements include two winners of the Cloncurry Stockman’s Challenge, one finalist and also Granddam of reserve champion at the Stockman’s Challenge.

A brief desription of the campaigned progeny is listed below:

Tecoma Jessies Cadet (Gelding)
Winner Cloncurry Stockmans Challenge 1993 and then went on to be a very successful drafter. In his first year of drafting he was reserve champion Rookie Horse of the Year. Has a QAHA Campdrafting Register of Merit.

Rambler Southern Oak (Stallion)
Campaigned in North Queensland and has won many challenges, drafts, ASH futurities, barrel races, western pleasure, reining and halter events. He also has a AQHA Halter Achievement Award. His list of achievements is extensive and he is now the sire of many outstanding progeny, including Diamantina Oak (dam of Lou Diamond Phillips and Hy Diamond), Jessies Golden Oak, Dreamtime Drover, and many more.

Rambler Marnie Two (Mare)
This filly was not campaigned, however is the dam of four very successful progeny, including Marnies Ace, Bay Star Marnie, Smart Marnie Lena and Time Traveller. 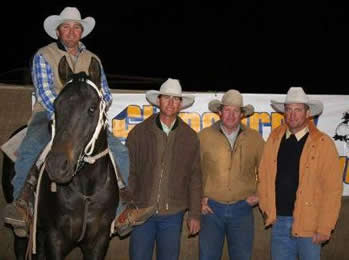 Rambler Marnies Command (Stallion)
Won or placed in several futuries/challenges, and then finalled in the Cloncurry Stockman’s Challenge. He was then purchased by Stanbroke Pastoral Company as a resident sire for their special breeding centre at ‘Fort Constantine’, Cloncurry. He was sold in 2008 and set the Australian record for an ASH stallion at $43,250.00 to Huon Smith of Boonara Performance Horses. He is now back in competition and winning.

Marnies Peppy (Stallion)
Won or placed in many futurities and campdrafts.

Marnies Destiny (Stallion)
Won or placed in over 60 of the major campdraft, challenge and futurity events in Australia.